The 11 'rules for success' from Apple

We are doing a shout out today to Apple.  A former Apple employee Huxley Dunsany posted a set of 11 “rules for success” that were attached to the back of his employee badge when he started at Apple back in 2004.  It's been reported in the USA in various publications and CNBC carried the article.  It's also on LinkedIn.  The substance of this post is one we think many of our clients and partners will identify with.  We often talk about how to hire the right people - this post is about how to start them off on the right foot.  So thanks to Huxley and others for sharing.

The graphic below shows the back of an Apple employee badge issued to Huxley when he started in 2004.  The JB in the "JB's Rules for Success" is John Brandon - a VP of Sales with Apple. The post we have reproduced as follows: 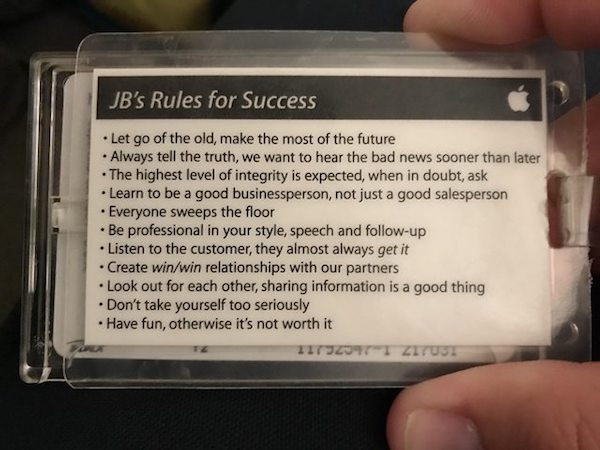 “He was a great guy in my interactions with him, despite his lofty position relative to my total-noob status back then. He really seemed to live by these rules and made the whole organisation feel like something really special, even when Apple was still climbing out of ‘beleaguered’ status,” Dunsany wrote.

In 2004, Apple was not the giant it is today. It had just launched the first iPod Mini, Steve Jobs was still CEO, and the first projects that would become the iPhone were just getting started in Cupertino, California.

One of Dunsany’s favourite rules is No. 5, “Everyone sweeps the floor.”

“It means that no job is too ‘low level’ or unimportant for anyone to help with. In other words, don’t get a big head just because you work for Apple or you got a promotion or you’re making $X per year — the basics still matter, and you’ll always be expected to help regardless of how high up you rise or how fancy you think you are,” he wrote.

Dunsany worked in a sales position in retail called Apple Solutions Consultant, but the lessons are broadly applicable to a variety of jobs and careers.

We would suggest that if you are an organisation that lives according to this list and you train your people to live by it also; then you will be successful.  We are not sure if this is the reason Apple is so successful.  But we can advise, that right now Apple has the largest market capitalisation of any publicly traded company at $749bn. Somebody is doing something right...