Authorities in India's most populous state, Uttar Pradesh, say they have been overwhelmed after receiving 2.3 million applications for 368 low-level government jobs. 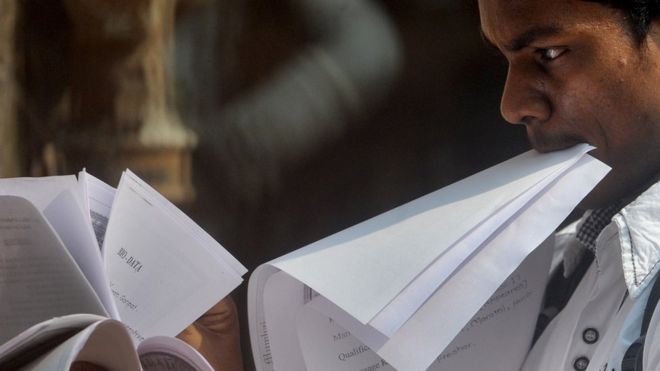 Prerequisites for the posts include having primary school qualifications and being able to ride a bicycle.

But, tens of thousands of graduates, post-graduates and others with doctorate degrees have also applied.  To be exact 152,000 graduates and 255 PhD holders.

Just in case you were wondering how juicy these positions are.  The successful candidates will receive a monthly salary of 16,000 rupees ($240 USD; £156).

The serious message here is that unemployment is a huge challenge in Uttar Pradesh where tens of millions are out of work.  The state, with a population of 215 million, is expected to have 13.2 million unemployed young people by 2017, according to one estimate.

Government recruitment drives have attracted massive responses in other parts of India, too.  Earlier this year, several people were injured in a stampede when thousands turned up to join the Indian army in the southern city of Visakhapatnam.  In 2010, one man was killed and 11 others were injured in the crush when more than 10,000 candidates gathered to join the police in Mumbai.  And in 1999, the government in West Bengal state was deluged with responses when they advertised 281 jobs and received nearly one million applications.

So if you think you have it tough wading though a sea of applicants.  Be thankful you numbers are not like these + of course if you are a client of ours you will have a system that automates a fair chunk of this for you :-)