Several things came together last week that prompted this post:  We all saw Gary Turk’s Look UP video on social networking (you can see it here too); one of the New Zealand cabinet ministers took a very public break from Twitter, a rugby player was rather foolish with a “sex-video” selfie as the media called it and a business who turned its back on social networking saw its profits - and marketing activity actually -  increase.  So what is going on with social networking? 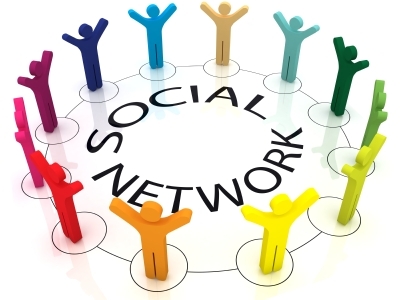 It's been a bad week for social networking - at least as far as our inbaskets have been concerned.  Regular readers will know, we have generally thought that too many take social networking and its various tools too far.  It has perhaps become a little like the fabled “Emperors New Clothes” story by Hans Christian Anderson (see link for previous blog post).

By way of context, three items occurred last week that have reinforced this view and prompted this post:

As well as the UK business we are also NZ-based and this week the NZ Justice Minister, Judith Collins, got her knuckles rapped for various misdemeanours including an online outburst that resulted in her seemingly being asked by the Prime Minister - to take a break from using Twitter.   It seems Ms Collins spent a considerable amount of time and effort tweeting away and its has all sort of backfired.  We also had a well known Rugby player taking a sex-video selfie of himself with a local actress which also got on Twitter and caused both amusement and some angst in the media (yes, what were they thinking you might ask?  - they probably weren’t).

We got sent a copy of a youtube video poem by a chap called Gary Turk.  We have enclosed it below and we think it is both well put together, beautifully done and thought provoking.  If you have not seen it, its well worth a look.  In it he contrasts the experience of a young man constantly on his smartphone and living through social media to what his life could be like if he stopped - or at least drastically cut down on his social networking.  It's had 30 million views so far and rather ironically has gone viral on the very medium it criticises.

One of the team was sent a report about a company int the US called “East24”.  They have spent considerable sums on advertising in online social mediums recently pulled the plug on the lot.  They had we understand spent around $1m p.a. on Facebook marketing their apps - so we are not talking chicken-feed.   They expected a corresponding drop in customer communication activity and sales from not advertising on facebook.  But actually found the reverse happened.  They had an increase in marketing activity from both customers and prospects.  The week after they stopped advertising on facebook:  downloads increased by 75%; email open rates increased from 20%-40% and on the qualitative side they noticed  a material increase in positive feedback from customers.  They even had a noticeable increase in customers asking to resubscribe to their email marketing lists.

So what is going on?

Taking the use of Twitter first.  We still remain amazed over the amount of time Twitter can take from your life. Those we all know who activity use it - use it a lot... By that, they spend a lot of time trying to build their followers, retweeting snippets and no doubt also creating some original content to try and engage others.  However at a business level we have not really come across ourselves any organisations that have actually made money from spending all this time and energy.  It is easier to see how a wit like Stephen Fry can use the medium.  Sending some ‘bon mots’ and jokes seems a good use for it.  However, very few seem to be able to get a reasonable number of followers and as we hear it, you can very quickly see your follower numbers drop if people don’t find it worthwhile.  Indeed, on the receiving end, many seem to find they can very quickly get overloaded with incoming tweets.

The video poem from Gary Turk does I think illustrate that perhaps there is a bit of a social networking backlash going on.  These days its hard to imagine many people  - in developed countries at least - who are actively engaged in business that have not tried some social networking by now.  For instance we all went on Linkedin and Facebook some 6-8 years ago, so the concept is not exactly revolutionary any more.  One anecdotal thing we have noticed is that our contacts tend to fall into two camps:

1.  Those who are very active at the start - then get the bug and keep at it and spend lots of time “working” at their social networks.

2.  Those who are active to start and then find their usage declines somewhat.  They still keep their accounts perhaps, but they dabble in comparison to when they first started.

From what we are seeing there are increasing number of people falling into the second camp - those who are in relative terms finding their use decline to a level of ad-hoc occasional usage. AT least in a business usage context.

Looking at the third item that crossed our inbaskets - the US company finding that its marketing activity increased once they stopped advertising on Facebook.   We have simply lost count over the years, of the number of “consultants” we have met who have sought to make a living out of advising organisations how to “take advantage” of social networking.  If you consider the UK recruitment industry some 8 years ago;  back then, all the recruitment consultants were desperate to become your friend on Facebook or similar.   Everyone was dabbling in it and you had to have a social network strategy to be a credible business.  There was no end of seminars and consultants ready to assist.  It didn’t really last though - even then - as candidates found that "friending" recruitment consultants tended to give the game away with their work colleagues.  On the client side, there are still very few organisations we know who will process applications without a CV - a profile on Linkedin/Facebook is still not enough in itself.  Through interestingly we also have clients who now won't look at candidates who don't have a linked-in profile.  Almost all recruiters we know, do make use of social networking.  But it's not the silver bullet the consultants used to say it was and it has not eclipsed other tools, techniques and channels.   This was not the only example we got but we did a post in 2012 on facebook (click for link) we also did a post for candidates on its perils when job hunting (Social Networking - lessons for candidates). 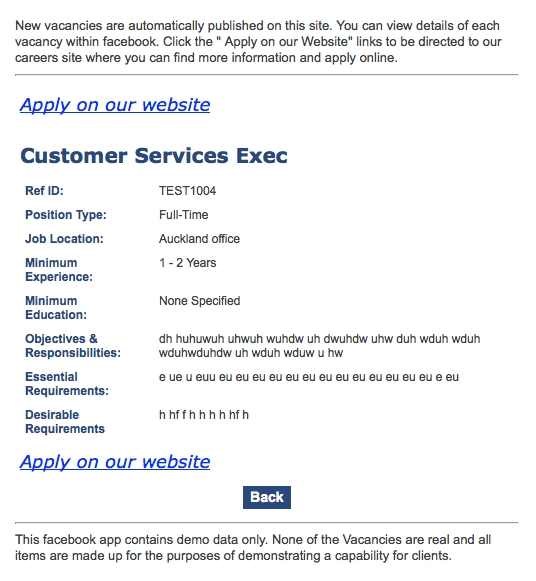 If we are honest we can think of many businesses we have come across over the years where activity on social networking has declined from what it was. In many cases it was probably overhyped and at unsustainable levels in the first place. We have noticed it ourselves in our software business.  Some aspects of social network support are part and parcel of the service.  However some other capabilities we see less demand for these days.  A typical example being our facebook app that allowed organisations to advertise their own jobs on their corporate facebook page.  You can see a screenshot of an example page with dummy text on the right - it displays your jobs in a listing with details and allows visitors to your facebook page to click and apply online.  It's a great little app.  But many of our Partners and their clients have moved on.  We know quite a few now who simply choose not to use facebook (and other mediums) as an overt marketing tool and this I think is symptomatic of much of the market where usage of social networking is much more considered and perhaps more constrained.

I am sure there will be those who disagree and the number of account holders on the major social networks is impressive.  But looking back - it's not what it was.  We still come across plenty of clients who have tried it, still use it a bit, but are now sceptical of doing much more.  If you disagree drop us a line...