What is 'Google for Jobs'?

It's a new job search engine powered by Google. The idea is that Job seekers can search for and apply to open positions directly from a Google search. Google is applying some of its advanced technology, including 'Machine Learning', to make it easier to find jobs that are a good match for what a candidate is looking for.

Google for Jobs is in some ways similar to 'Indeed.com', in that it  pulls job listings from many different sources.  The difference is that we now have a much bigger and more powerful player in Google  pulling the job listings for your review, and it uses Google's advanced technology will power the search results. Given Google is the most comprehensive and widely used search engine in the world, it's hard not to see this as recruitment advertising game-changer.

Before we go into how it works and some of its expected features.  We should first confirm where it is in terms of rollout.  At launch last May, it was available purely for use in the USA.  Earlier in February, Google announced many of the major South American countries would now also be supported.  So, this means if you are outside these countries you will not see the 'Google for Jobs' search engine if looking for jobs on Google.  It seems to be a fairly slow rollout and comments we have seen, suggest it will be closer to end of 2018 before the European countries get included and possibly beyond that for other regions.

The current rollout also only supports displaying jobs from certain employers and jobboards. Indeed.com, for example, is noticeable for not being on the supported list (its currently one of the largest job-boards).  However, it's encouraging to see that Linkedin has now being added. Interestingly 'Catho' one of Brazil's leading jobboards, owned by the Australian Jobboard company Seek, was not included in that country's rollout.  From what we understand, its both commercial and technical considerations are coming into play regarding whom is supported and who will be left out in the cold (see later). So for now at least, it seems that only some jobboards will be supported in each region.

How does it work?

We have included a Google video below which should give you a good idea - as well as a screenshot (at the foot of this post).  Key to the proposition, is Google's advanced technology.  As you might expect, the search facilities are particularly powerful.  They are also introducing some new facilities we really like.  For example; you can see salary information for the job, even if the listing doesn't contain any salary information. Where salary information is not included on vacancy listings - as is very common in counties like Australia and New Zealand - Google for Jobs will include an estimate based on data for a typical salary for that kind of job.  In the USA they currently use information compiled by; Glassdoor, PayScale, Paysa, LinkedIn, and other sites to provide the guide.  Also in the USA, they include employer rating from Glassdoor and other career-related sites (if available), as well as a link to the employer's career website. When you see it in actual use (see the video) it's very comprehensive.

Linking directly back to an employer's career pages on their website is also a key aspect of the proposition. Just like the normal google search engine; Google for Jobs will try, where possible, to direct you right back to the employer advertising the vacancy.  In this way employers can take advantage of their own online systems to take in applications directly and better advertise both the vacancy and their overall employer proposition.  Many of the better jobboards work this way and we certainly believe it results in a more effective recruiting experience; candidates can better assess the employer and the employer can in many cases better manage the application.

Google are keen to stress the new technology aspect.  They talk about 'Machine Learning'.  It's just a form of what is more generally called 'Artificial Intelligence'.  However, it's area Google is very strong in and its great to see it being used here too.  In brief, the idea is that it helps job seekers find jobs that might not show up in a traditional jobboard-type-search. Users can now refine results and produce more personally relevant lists of jobs by using filters and by enabling them to both identify and group together 'hard-to-categorise' jobs that might not be readily found by clicking on traditional job categories like e.g. sales, or finance.  It also is able to identify duplicates.  We all know the problem.  You see 5 adverts from 5 agencies all advertising what is fairly clearly the same job across several jobboards. The Machine Learning will note your preference and direct you to your most trusted source and omit the duplicates.  Another great feature is that you can "Save Jobs" that are of interest and have them synch'd across all your devices.

I remember back in 2006 wondering why Google was not doing more of this then.  It seemed obvious to me at least - and I was working in the jobboard industry at the time - that they could do it really well.  However, if remember correctly, the feeling at the time was that it would have positioned Google with too much power in the market.  It would also meant that Google would have likely done to jobboards what they had just done to newspapers - basically screwed up their business models and massively reduced their profitability.  Google was very dominant back then and still on the rise. The feeling  was that regulators would not accept it adding to it's dominance. The difference now however, is that Google Search itself is a lot less dominant. Sites like facebook provide their own web ecosystem including their own advertising and search wholly within their platform.  They don't need Google in the same way and you can find and spend lots of time on the web without Google. Now, Google wants you back searching with them and how better to do this but to also include job searching alongside other searches.   It's a logical extension really.

Right now - its still very new and it's a slow rollout.  You are not yet missing our by not being on it. Indeed it seems they are carefully finding their way and trying not to create too big a splash (and possibly get into issues with regulators).  They are also making efforts to provide a platform that will be noticeably different from that of the current jobboards.  The only major one that seems to come close in our view, is 'Indeed.com' and interestingly, as advised above, they are not included...

We think Google for Jobs will change the advertising landscape for job listings. Over time, it will put more power in the hands of the employer away from agencies and traditional job-boards which is in our view a good thing.  It's clear to us that Google are not simply looking to aggregate listings from jobboards.  Given most employers likely advertise with Google already, we think its also likely that Google will be looking to (over time) do their business direct with the employer. Right now, they need the jobboards to provide a large quantity of listings to get them started.  However, as noted above, Google is all about more effective searches and directing those searching back to the most authoritative source of the information. That means going direct to the employers website and the employer wherever possible.

We thus think it likely that the Jobboards that work more inline with google i.e. support directing vacancies to employer careers webpages will be the first to be included.  Also, it does in our view put a question mark over much Recruitment Agency advertising.  We note that some jobboards already allow candidates to choose to exclude agency adverts.  As we mention above, it's not unusual to see the same job advertised multiple times by different agencies. Most candidates are well aware that the smart job hunting move is to apply direct to the employer wherever they reasonably can.  After all, most employers prefer candidates who apply direct over those coming from agencies. It's certainly much cheaper for the employer than paying a hefty fee just for an agency to send you back a CV from their advert on the same job-board...

To wrap up. We think you will likely hear a lot more about Google for Jobs, especially when it get a broader rollout.  You can also expect it to evolve and to expect more development and many new features during the rollout period.  Whilst it's not a big player yet.  We think it will likely become - over time - one of the most used advertising mediums for jobs.  In fact it could easily become the dominant recruitment advertising platform in most regions.

Definately one to watch for the future... 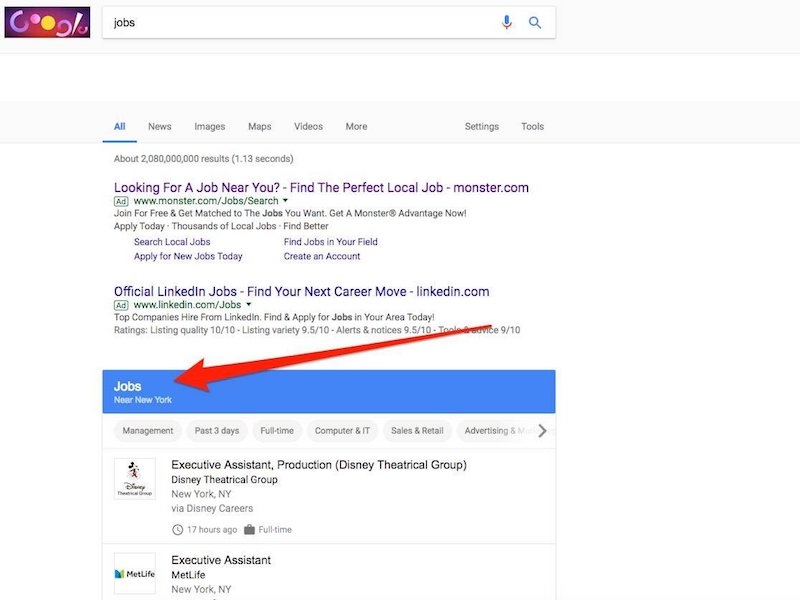