Well its close to being end of an era.   Most of the versions of Internet Explorer (IE) being actively used are now are formally without support from Microsoft (that ended on January 12th).  Specifically; "end of support means there will be no more security updates, non-security updates, free or paid assisted support options, or online technical content updates," for IE 8, 9 and 10. 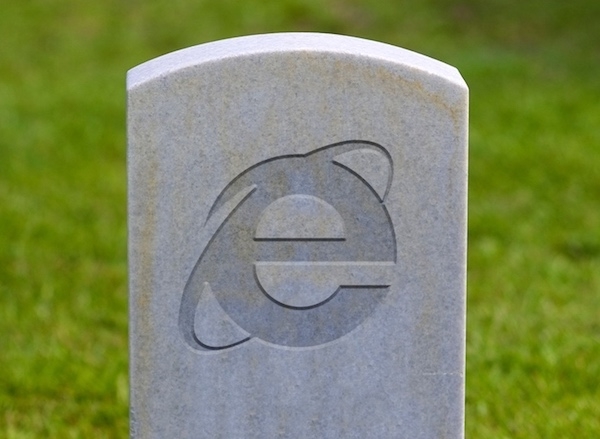 To be fair, this was well known to Technical Support departments given advance notice supplied by Microsoft in August earlier this year. This now means that only IE11 is now supported, with a couple of exceptions for corporate users of older versions of Windows Server and Vista (that wont work with IE11). Microsoft have also launched what they say is a completely new browser called Edge for Windows10, so even IE11 looks on shaky ground as time goes by.

We are suggesting that it's the end of an era.  IE used to have a real hold on the browser market and used to be used, by almost everybody.  However it's market share has been dropping considerably over the years - see table below for approximate estimates.

With 11% market share you might wonder why this is news?   Well the trouble is - the 11% includes a lot of corporate users.  Most large corporates we see, are still using IE and in many cases not the most up-to-date versions either.  Given this end of support advice and the risks of using browsers without security updates, many will now being looking at upgrades.  However that may not be as simple as it seems.

One of the problems that has dogged IE is that it was one of the least compatible browsers. Back in the day, where it had market dominance, Microsoft introduced new features and tried to make IE the defacto market standard.  However the market did not want just one company owning the web and other arguably better products started taking market share, leading to the fall from grace exemplified in the above table.

Microsoft has since sought to make its newer versions more compatible with other browsers as well as with the new standards such as HTML5.  However, many applications that are still in use, by corporate users in particular, were set up to work with older versions of IE and now wont work (well) with the newer versions.  Some of Microsoft's own applications contributed to this.  As an example, if you have used OWA (Outlook Web Access) lately you may have found it is not really useable in Chrome or Safari.  We see many corporates where HR departments are still using old versions of IE (version 8 seems to be still being used a fair bit).  A reason they do is that they also have other applications that need an older version of IE to operate properly. We deal a lot with HR departments and - this is just an observation on our part -  there seems to be quite a number of Payroll Admin systems that require older versions of IE.

When we design systems that will be used in a corporate environment, such as backend administration systems we always check to see what is being used by the client so we can ensure that compatibility issues are minimised.   For public access websites and systems this is less of an issue as most personal users have more up to date versions and as the table above shows, many have switched away from IE entirely.  With all the major browsers offering free versions there is really no reason as an individual for you not to upgrade or change, it's free and very easy to do.  But this not the case for many corporates where compatibility with older applications is essential.

We would dearly love to see all our clients move to more modern browsers and their latest versions, but two issues come to mind:

The issues round browser compatibility will be thus with us for some time to come.

If you would like to know more about browser and compatibility etc then let us know and we may do a further post later in the year.