A post about 3 of the more problematic traits you probably don't want in your candidates.  Together they are being referred to as the "Dark Triad".  With conventional psychometric tests and interviews fairly ineffectual at uncovering them coupled with the havoc such employees can wreak within an organisation it's an important topics for recruiters.

We have explored Narcissism in previous posts and materials.  This time we are including two others in what is being referring to - in the popular press at least - as the "Dark Triad".  It's a subject that has had some discussion recently within the UK, with even the Daily Mail and BBC carrying articles.  You may even have been sent the online quiz that provides a fun assessment of where you sit between the 3 traits (see graphic below and at the end of this post for the link).

All three of these personality traits within the  "Dark Triad" are directly relevant to the workplace and to your recruitment activity.  Consider workplace bullying for instance - a topic that gets a fair bit of attention within HR right now.  Is it not better to avoid hiring the bully, rather than having to deal with the aftermath within the workplace?  However how do you screen a bully out.  If you use psychometric tools or assessments do they highlight these traits?  From our own experience few if any do.  So before we look at what you can do.  Lets first look at each of the three traits individually:

Narcissism can be broadly defined as; the pursuit of gratification from vanity or egotistic admiration of one's own attributes.  Narcissism is usually considered a problem in a person's or group's relationships with themselves and others. Note, it is not the same as egocentrism.  Sandy Hotchkiss identified what she called the seven deadly sins of narcissism as:  shamelessness, magical thinking, arrogance, envy, entitlement, exploitation and bad boundaries.  From a  recruitment point of view these are the people who exaggerate their accomplishments and experience and may tend to outright lies to make them sound better than they actually are.

Machivellianism is the employment of cunning and duplicity in statecraft or in general conduct. The word comes from the Italian Renaissance diplomat Niccolò Machiavelli.  He wrote a famous book of the time called "The Prince" which can best be summarised as a handbook of manipulation and how to get what you want.  From a screening point of view, those with this trait should be shown to be associated with low emotional intelligence in well run assessment tests.  It is also related to cold selfishness and pure instrumentality with those affected giving priority to; power, money and competition - often at almost any cost.  Within the workplace it has been shown to be aligned with: obtaining or maintaining power, harsh management regimes and manipulative behaviours.

Psychopathy needs more careful interpretation. It is popularly associated with mass murderers who exhibit no feelings towards their victims.  It is perhaps however better defined as; a personality trait characterised by enduring antisocial behaviour, diminished empathy and remorse, and disinhibited and often bold behaviour.  Though other definitions are also used. It can be a full on personality disorder. However, it is more usefully regarded as a continuous aspect of personality, exhibited in different personality dimensions within a population in varying combinations.  At their core, these people lack empathy and are anti-social. However, within a usual workplace setting they will make great efforts of disguise this. 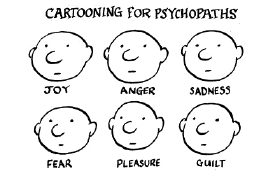 The Dark Triad refers to when the 3 are all together, within a single individual.  Indeed as is hopefully apparent, that whilst they are independent conditions, they are likely to exist together to a greater or lesser degree where any single one of these traits is identified within an individual.

However - is it all bad?

No. Not all people who identify or are assessed with these tendencies are criminals or worse. We should acknowledge that many will hold senior positions within organisations.  Indeed these traits have very likely helped them secure their current positions.  After-all, having some ruthlessness, the ability to manipulate people and implement hard decisions is often part of working at senior management.

However like most things, what may be good in small doses can become bad when the doses get larger.  Organisations generally rely on people working together for a common aim - not just for the gratification or benefit of individuals.  Having trust between team members generally helps in getting things done.  Teams tend not to function very well when an individual has their own agenda and  starts manipulating others.  Finding out after the event that people don't have the capability or experience that they claim will generally cause signifiant problems, etc.  So, if you had the chance to identify and weed out such individuals within your recruitment process would you not want to?

Identifying the Dark Triad traits at the recruitment stage

First do understand - people with these traits will sound very convincing.  They will, in particular, tend to "interview well".  That is, they will bend over backwards to appeal to the interviewer and "get on side".  They will likely exude; presence, charm and confidence. Not everyone who interviews well will have these traits.  But you should be aware, that within a face-to-face situation most who do have these Dark Triad traits, will likely be able to hide the more obvious markers. They will not for instance, readily radiate as a psychopath to most recruiting managers - even if they score high on that spectrum.

Studies by the University of British Columbia have shown that those with Dark Triad traits rely very much on face-to-face interactions, both to weave their dark arts and also to disguise their more malevolent skills. They will seek out face to face situations and they will to the untrained eye "interview well". However, if interviews are not a good means of identifying them,  fortunately other means do offer more promise.  In a statement from a recent study said: "The results of this study are pretty clear – once you remove non-verbal cues such as body language from the equation, the ability to smoke out narcissists and psychopaths becomes easier”.

For us, it seems clear that this is another example of where the "standard face-to-face interview" won't reliably pick the best or most appropriate candidates.  This is perhaps especially true where interviewing managers have not had training or much interviewing and assessment experience.  We are big proponents of both testing and telephone screening within the recruitment process and these tools/techniques may provide a counter to just relying on an interviewer with these candidates.

The BBC quiz is at the following link:  http://www.bbc.com/future/story/20151123-how-dark-is-your-personality

A sample of the results is enclosed by way of a graphic - before anyone asks - no one here is owning up to whose result is being featured below :-) 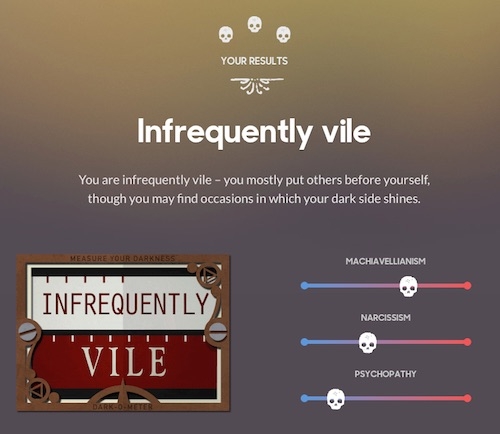